This is the second part of a two piece article on combat within Faerie Tales & Folklore.

A fight can seem like such a simple thing, find two or more individuals who are feeling a bit antagonistic and place them in close proximity. From this point however, the whole process becomes MUCH more complicated. There are questions of how and with what; of defense and tactics; and the list could go on. It might be this complex nature of combat that fascinates and terrifies us in equal measure. Perhaps it is the voyeuristic nature of roleplaying which feeds this fascination and abates the terror of violence, encouraging us to explore its most severe manifestations with the vim and vigor only fantasy can provide. In this blog, the second in a two part series, I aim to offer additional detail on arms and armor as they are represented in the Mythological Earth. Specifically, I will be shedding some light on a few of the uncommon mechanics used to define arms and armor within the system, along with a bit of detail on the various combat subsystems themselves. (Continued below)

I will first delve into armor and armor class as they segue well from the discussion on hits and death. Armor, in its various forms, is handled by way of a familiar term “armor class” as well as the value attached to that term. However, armor class in Faerie Tales & Folklore has a more defined meaning then many games that make use the statistic. Each armor class value represents a specific combination of armor type and the presence, or lack, of a shield. These values are as follows:

This use of a specific value allows the different armor and shield combinations to have different defensive capabilities against different types of weapons. Any bonus or penalty to armor class (or defense, as such modifiers are often termed) is used to modify the roll and does not change armor class. By keeping armor class a static value that is directly related to the protection worn, the differences in protection from armor type to armor type are easily maintained. This method of handling armor class allows arms and armor to interact in a much more realistic way.

Melee weaponry within Faerie Tales & Folklore makes use of a statistic called “Weapon Class” to distill a wide array of weapon data into a single value. Weapon class might be seen as a measure of size, but it is really much more. A weapon’s class is a specific value that corresponds to a tight array of similar weapons: hand axes, swords, spears, etc. This value encompasses such things as: length, speed, lethal area, and the ability to penetrate various armors. A weapon with a higher class is bigger, more cumbersome, and generally more likely to score a hit against heavier armor. By contrast, a weapon with a lower class is lighter, shorter, and more easily manipulated, but is often not as lethal against heavier armor. The various weapon classes are as follows.

These classes, ordered by numeric value, can offer more information then one might first assume. Weapon class serves as the direct counterpoint for armor class and the two provide a level of interaction not commonly found in other d20 based systems, with the possible exception of AD&D (if all of the printed facets of a weapon are used). Each weapon class has a different set of odds to score a hit against each of the armor classes, thus more effectively mirroring the capabilities of real world weapons and armor. The class of a weapon also influences how rapidly the weapon strikes, the effectiveness of a weapon when parrying the attacks of others, as well as who strikes first during any given round (these effects are detailed on pages 339 through 340). With this system, it is a good idea to carry a few different weapons to ensure one’s combat readiness for a multitude of scenarios, as any good warrior of history would have done.

There are two elements which can apply to any melee weapon that are not covered by the weapon’s class, the number of hands required to use the weapon and weather or not it may be thrown. A weapon that requires two-hands to use, or offers the ability to be used two-handed, is especially deadly to unarmored and lightly armored targets. Such weapons score automatic critical hits against any target who has an armor class of 1 or 2. The benefit of a thrown weapon should be relatively self-explanatory, which brings us to the discussion of missile weapons. (Continued below) 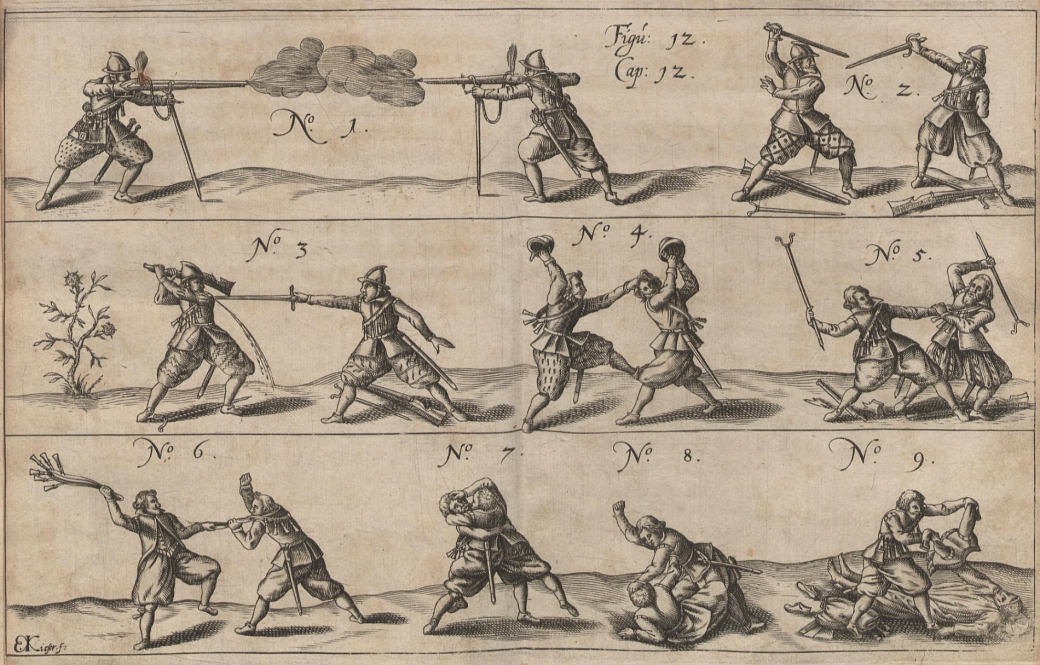 There are a few aspects of missile combat that are handled differently in Faerie Tales & Folklore. One of the most important is the idea of direct and indirect attacks. If a missile weapon makes a direct attack, the projectile follows almost no arc in its flight to the target and arrives with most of its velocity intact. An indirect attack is made with a noticeable arc of travel, enough to pass over intervening objects and people. Such attacks generally arrive with a reduced velocity and thus have less penetration. All missile weapons that utilize force generated by the user automatically make indirect attacks  once they exceed half of their maximum range. This makes most missile weapons perform in a manner more consistent with their use in the real world. Another important difference about missile attacks is that they are resolved during two phases of the combat round, the half-move and just before melee. Thus, one may make both melee and missile strikes in the same round.

The primary combat mechanic in Faerie Tales & Folklore is built around the idea of gaining more chances to make a combat roll instead of adding ever larger bonuses to increase the odds of a single die roll succeeding. It is a good idea to remember that each combat roll does not have to be seen as a separate attack, from a narrative perspective. In fact, it might be better to think of the results of a character’s combat rolls as a measure of offensive output during a given round, rather then a specific number of attacks. Faerie Tales & Folklore does offer a few bonuses that may be added to a combat roll, but it is through the addition of more combat rolls that a character or creature truly becomes a better combatant. This central premise in the game’s mechanics separates it from any of its peers who use variations of the “Alternative Combat System” original found in OD&D. Though it can take some getting used to, the system is not difficult once understood. The fact that a sword always requires a modified roll of 13+ to succeed against a target wearing mail armor (as an example), makes it easier to remember the various values as they do not change.

Faerie Tales & Folklore commonly makes use of two other variations of the combat system. One for large scale engagements or wars, and the other for combating mythic creatures. In both variations, the exact equipment used by the attacker and defender has less meaning then in single combat. In large engagements, combatants fight as their troop type and when engaged in mythic combat, only the mythic value is followed (hero, great hero, wizard, spirits, etc). Any bonus a character or creature adds from magic, attributes, item quality, etc is retained in mythic combat but not during large scale engagements (unless the character is choosing to act independently). However, neither of these two forms of combat focus as closely on the interaction between various armor types and attacks from various weapon types as single combat. In a way, a large scale engagement is a bit like pulling the focus back from the scene a bit to increase the amount caught in the frame. You can see more of the scene, but at the sacrifice of detail.

Mythic combat, like simultaneous hits, marks a major milestone in the evolution of any character. If a character has a magical weapon, as well as the ability to engage in mythic combat, there is little they cannot confront in direct battle. Mythic combat is intended to be more of a measure of skill and heroism then superiority of arms and armor. Though gear has little effect on mythic combat, bonuses from magic, quality of equipment, exceptional attributes, etc are all still utilized. By keeping mythic combat somewhat separate from the other variations of the combat mechanic, the paradigm is allowed to shift between the practical issues of equipment and into the less quantifiable issues of bravery, skill, and possible supernatural ability. Thus, a battle against a mythic creature is not won by way of gear, but rather the truly heroic nature of the character involved.

When learning any new system, I recommend that players and referees not concern themselves with all the details of the rules to start. Learn enough to play a game and bring in more of the rules as they come up. This is especially useful with most combat systems used by roleplaying games, Faerie Tales & Folklore being no exception. Learn how to make a combat roll and when to add more; get an understanding of the combat tables and when to use each; and learn the order of a round. Once the basics have been understood, start exploring the rules for critical hits, called shots, unarmed combat, duels, etc. Explore new rules as the situations they govern arise, thus allowing a more organic discovery process. For many, myself included, this is often an easier way to learn the intricacies of a new system. This method can, and likely should, be extend beyond just learning about combat. To this end, the table of contents for “A Roleplayer’s Guide to the Mythological Earth” uses the asterisks (*) to indicate the rules and sections to read first. Following this suggestion should aid in understanding the rules while preventing them from becoming overwhelming for the new reader. (Continued below)

The central premise of the systems which govern combat within Faerie Tales & Folklore was to try and find a balance between simulation and abstraction. The goal was to offer what I call “efficient detail”, or a level of detail that does not unduly detract from game play, yet provides enough information to ease the visualization of the battle at hand. An overzealous attention to detail can quickly cause a system to “bog down”, too little detail and combat quickly becomes completely uninteresting. All roleplaying games seek to find a balance to this equation and I can only hope I that my efforts find an audience beyond my own. There is much more to combat in Faerie Tales & Folklore, from terrain and other environmental conditions to movement and formation, there are even subsystems for dueling, jousting, unarmed combat and grappling, but these are topics for another blog. My desire with this article was to detail the interactions between armor and weapon. To that end, I hope I have had some success.

Enjoy your time at the game table friends and remember, an intelligent warrior has a better chance to become an old warrior…